Amazon’s Scout delivery robots are set to begin carrying out autonomous deliveries in Irvine, Southern California, marking its first deployment outside of Seattle.

Its autonomous delivery drone, which is plastered with Amazon’s signature blue and drives on six wheels, will begin making deliveries this week according to a blog post.


Amazon has been testing its Scout robots in its hometown of Seattle since the start of the year, where Amazon Scout’s vice president Sean Scott says it has “experienced all of the region’s weather”, including rain, sun and snowstorms and carried out thousands of deliveries.

“It’s now time for Scout to experience a little more sunshine,” he added.

Six Scout vehicles, which were developed entirely in-house by Amazon engineers, will now begin carrying out same-day and one-day deliveries to customers in the area during daylight hours from Monday to Friday, but will still be accompanied by a human minder for the time being.

It is understood that they’ll be sent out at random, regardless of which delivery option the customer chooses.

Designed to withstand the demands of travelling numerous miles a day, the cooler-sized vehicle uses cameras and ultrasonic sensors to detect and avoid obstacles, while autonomously navigating across urban areas to complete deliveries.

Amazon’s team are understood to be experimenting with virtually simulated sidewalks that mimic real urban environments to train the robot’s AI systems.

“We’re constantly thinking through how our Scout devices will integrate into the neighborhood and delight customers,” Scott added.

“It’s the reason we developed Scout from the ground up with safety and convenience in mind.

“We’re still in field test mode, and our expansion to the Irvine area is just another in the many steps forward for this new delivery system. The future is right around the corner, and we couldn’t be more excited.” 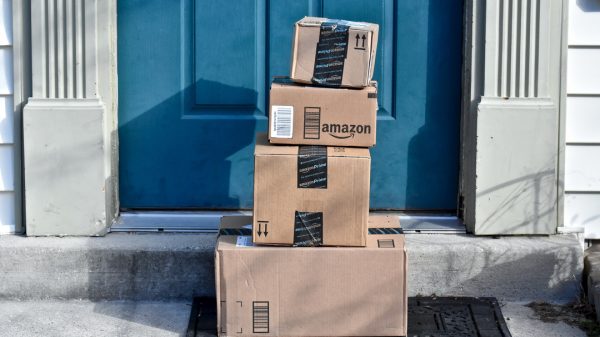