Behind the scenes at Amazon’s robotic fulfilment centre

“Amazon is not too big to fail,” – Jeff Bezos

You’d be forgiven for questioning the words of the world’s richest man after witnessing the mind-boggling scale of just one of his 175 fulfilment centres.

Though nearly 90 per cent of shoppers in the UK use Amazon and just under 40 per cent of all online retail sales in the US are made on its platform, so few have any idea what happens between clicking the “Buy Now” button and receiving their cardboard-clad delivery.

To try and understand what these near incomprehensible statistics feel like in the real world, I took a peek behind the online curtain to explore one its many automated warehouses.

“If a building is chaotic, we see that as a as a failure,” my tour guide, Amazon’s UK safety manager Raz Osman told me.

“You have to have a steady rhythm in how the business operates because that’s how you can be most efficient”. 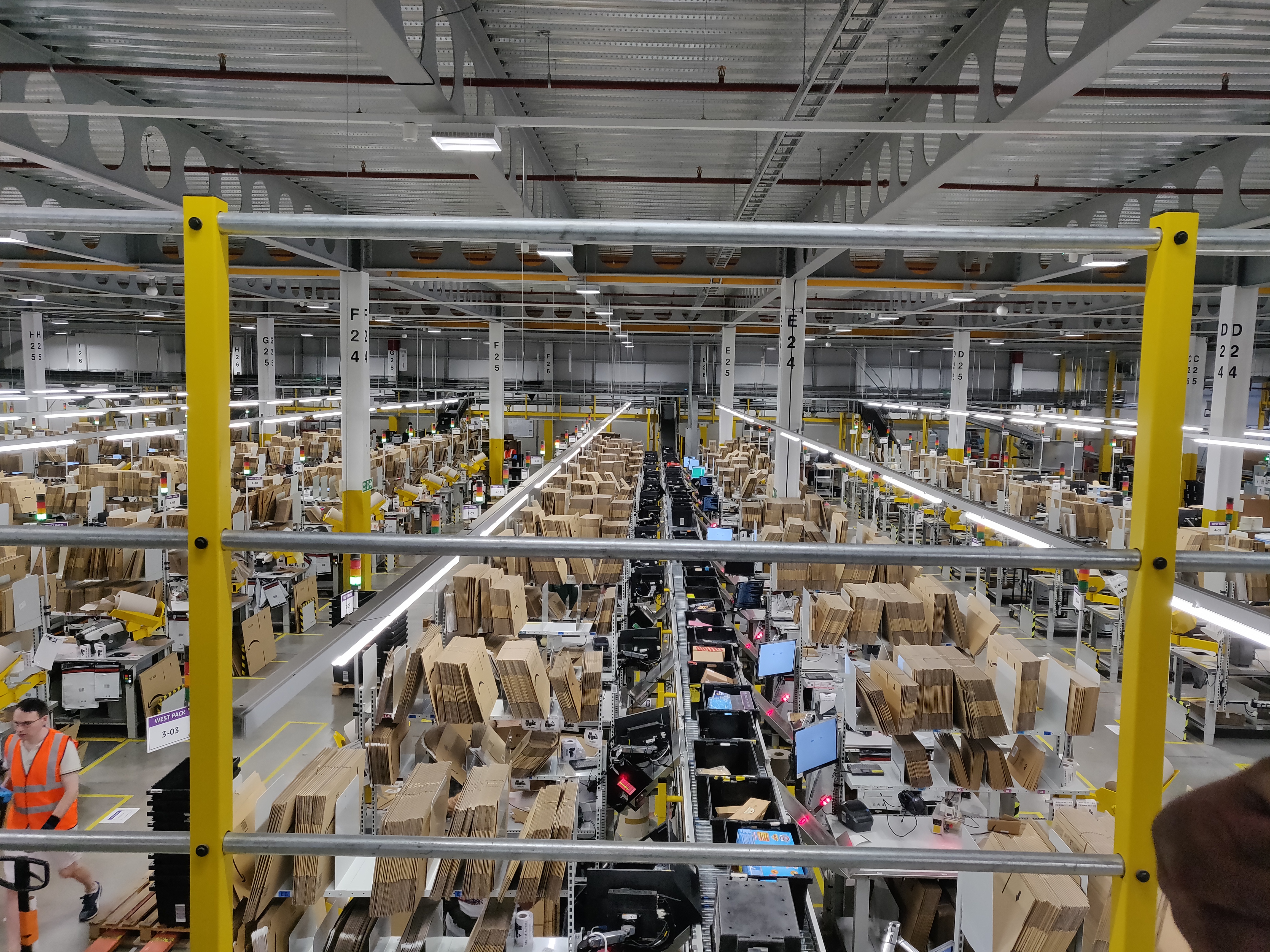 My Willy Wonka-esque adventure started on the ground floor of Amazon’s fulfilment centre in Tillbury LCY2, which like all of Amazon’s warehouses is named after the nearest airport, London City.

Spanning nearly 2 million sq ft (or 28 football pitches) across three floors, the two-year-old fulfilment centre dealt with what Amazon refers to as “sortable” items, basically meaning items which can fit on a shelf.

Amazon’s senior PR manager and my second tour guide David Nieberg explained: “Every site has a different purpose, right? You’re not going to fit a canoe on a shelf, so you can have certain sites which are “unsortable”, which are essentially the sites where you can have the bulkier items.”

Each site is categorised in terms of what it can handle, some are specialised to deal with hazardous materials, others like one launched in July handle wines and spirits, while its fulfilment centre in Edinburgh handles all Amazon’s UK returns.

Items arrive on the ground floor of the building from one of the myriad of sellers utilising Amazon’s service, or from another Amazon warehouse via what it calls “transportation arcs”.

This is the process by which multiple items in a single order are brought together from various locations before being delivered to the customer.

“There’s an algorithm which will essentially look at the four items and where they are, and works out the quickest, most efficient way to get to the customer,” Nieberg continued.

“Now, it could be three of them are in this building, another one’s in Frankfurt, the system will work out how to get them all together and get them to that customer as quickly as possible.”

Once items arrive via delivery truck, they’re unloaded by staff who subsequently scan the items’ barcodes, marking their introduction to the warehouse’s complex digital ecosystem which will track their every movement from here on.

Packages then head upstairs via the labyrinth of conveyor belts, which total 20 miles in this centre alone, to be “stowed” by staff. 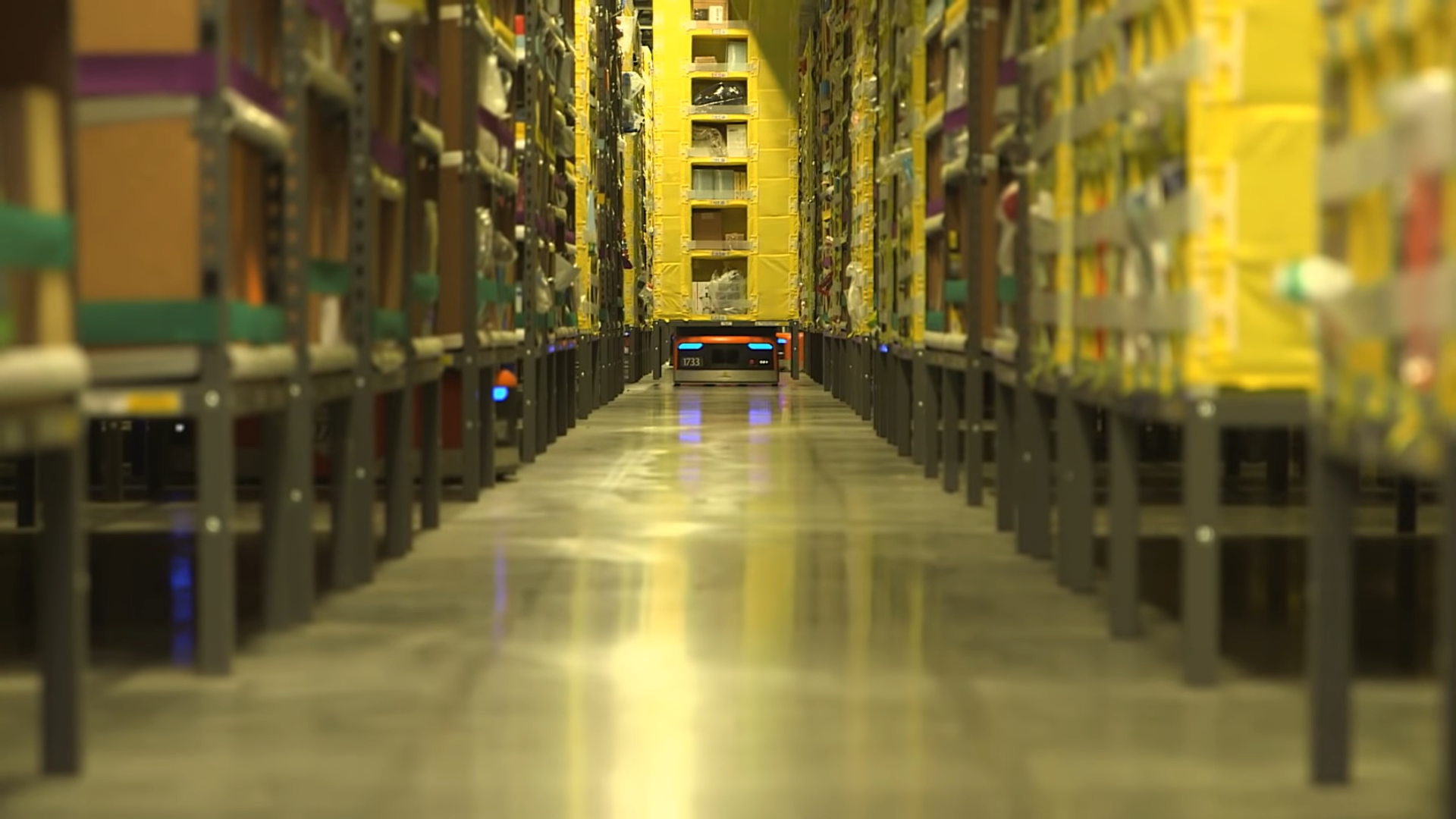 Behind a metal fence which stretches to the ceiling, lies a forest of bright orange, six-foot-tall, square “bins” each with various pockets where items are stored. This is the AR field, where the Kiva robots work.

These small robotic drive units are responsible for animating this forest of bins, zipping underneath them, spinning them around and moving them at mesmerising speed and complexity in what can only be described as a ballet.

“If you think about a supermarket, when somebody goes shopping, you’re going to have somebody to fill the shelves, and then the customer comes and picks it up,” Osman explained.

“Here, putting the items in and taking them is still done by a human, but the shelves come to them!”

Each Kiva bot is able to navigate under thousands of bins via small barcodes on the floor called fiducials, finding a bin with a vacant pocket, positioning itself underneath it, then carrying it to the stowing station.

The stowing station is a hole in the fence where an employee will scan the item, bin and individual pocket in which it is stowed so the system can track with pinpoint accuracy where the item is at all times.

By manoeuvring underneath the bins, which can weigh up to 1000 pounds, the Kiva bots diminish the need for walkways or corridors, enabling Amazon to pack 50 per cent more items into their available space.

However, handing over such a fundamental role to the Kiva bots has its stipulations. Anywhere behind the fence is their space, and staff are strictly forbidden from crossing the barrier, even if they drop an item they’re picking or stowing at their workstations.

Only specially trained members of staff called “Redjackets” have the authority to venture into Kiva territory, equipped with a high-tech jacket which prevents the robots from coming anywhere close to them.

The jackets project a field in which the robots will stop in their tracks, or navigate around entirely, allowing the Redjacket to move safely through the space.

Next the bots will line up bins at picking stations, almost the reverse of stowing stations, where staff scan the bin, shelf and item, being careful to ensure it matches the customer order, before sending them off for packing.

The queue of bins is like a living being, shifting, spinning and allowing other bins to jump in. This is down to yet another complex algorithm which randomises the products and where they’re placed in the bins.

“The randomness of it is quite mind boggling”, Nieberg continued.

“Now, here’s the theory behind it. If you order three things, and one is a box of pens, it is statistically more likely for the next item on your list to be anything other than another box of pens”.

In other words, by randomising products, as opposed to storing them in categories as is traditionally practiced, Amazon effectively improves efficiency. This is because items within a single customer order are more likely to be something totally different than they are to be various versions of the same product, rendering proximity of where they’re stored meaningless.

The system will not allow the stower to place similar items in the same shelf, as this increases the chances of the picker getting the wrong item.

What’s more, the attention paid to ensuring every item is tracked fastidiously means that “the inventory across every fulfilment centre across the entire world, we know exactly where that is”.

Osman told me that “there was a story recently where a guy was returning something and accidently packed his passport into the box.

“He called customer services and said: ‘look I think I packed my passport into the parcel, I’m flying tomorrow is there anything you can do?’. We were able to find the parcel immediately and send it back to him via Prime.”

Downstairs on the packing floor, understood to be the most popular place to work in the warehouse, staff simply have to find the right sized box and put the package inside. 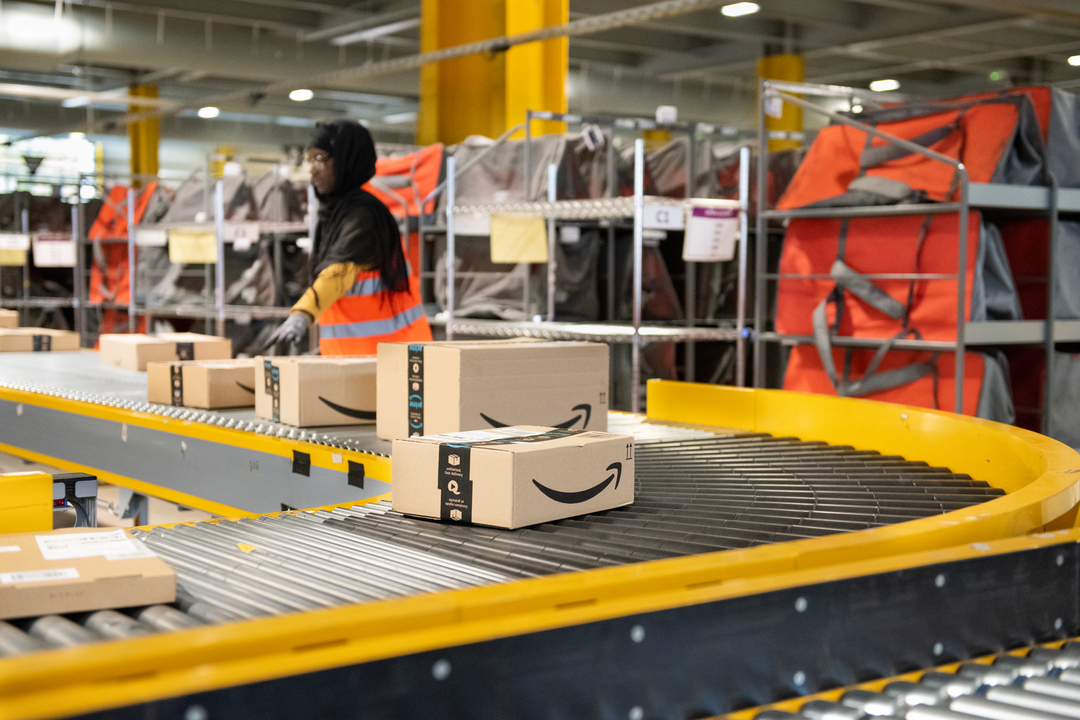 A device called a “QV scan machine” will use 3D scanners to accurately measure the dimensions of the products being packed when vendors provide inaccurate details, ensuring that unnecessary packaging is kept to a minimum.

At this stage, although packages have a barcode so they’re identifiable, no customer details have been added to the packages.

The SLAM machine, which administers labels at a blistering pace, is almost onomatopoeic. It will first scan the items barcode and weigh it to ensure it whatever inside is what it should be. A robotic arm resembling a Dalek’s plunger-like appendage then shoots the items label onto the package with a blast of air.

Amazon is now inviting the public to come and take a tour of select warehouses, granting them a similarly tantalising opportunity to see just how important robots have become in ensuring their Prime deliveries are made on time.

Though these tours are designed to show off Amazon’s flashy technology, it’s clear they’re also held to demonstrate the ongoing importance of its human staff and negate any fears of a fully automated supply chain.

As Nieberg explained: “People constantly ask us when talking about robotics what is happening to jobs, when will you have a fully automated warehouse. The answer is, not in our lifetime!

“The jobs come alongside the technology, so there is no just replacing everybody with automation. What we’re doing is creating new industries, creating new roles, new opportunities and training people.”