Ocado has announced the proposed acquisitions of Kindred Systems and Haddington Dynamics in two deals worth $287 million.

Kindred Systems was described by Ocado as an “advanced piece-picking robotics company”, and set to be acquired by the online grocery platform for $262 million, subject to closing adjustments.

Founded in 2014 and based in Toronto and San Francisco, Kindred Systems designs, supplies and services piece-picking robots for ecommerce and order fulfilment.

Kindred Systems has around 90 employees, with approximately half set to join Ocado’s existing technology team.

Haddington Dynamics is a robotic-arm designer and manufacturer set to be acquired by Ocado for $25 million, subject to closing adjustments.

Based in Las Vegas, Haddington Dynamics specialises in the design and manufacturer of low-cost, lightweight robotic arms, and counts NASA as a current client.

Ocado noted that Haddington Dynamics’ arm design and technology allows for the arm to be manufactured at a relatively low cost via 3D printing, with a corresponding positive impact on the financial returns of robot deployment.

The online retail platform said it expected Kindred Systems and Haddington Dynamics to “accelerate the commercialisation of robotic picking and other automation tasks” for its clients.

“We consider the opportunities for robotic manipulation solutions to be significant, both for Ocado Smart Platform clients and across the fast-growing online retail and logistics sectors,” Ocado chief executive Tim Steiner said.

“Ocado has made meaningful progress in developing the machine learning, computer vision and engineering systems required for the robotic picking solutions that are currently in production at our Customer Fulfilment Centre in Erith. Given the market opportunity we want to accelerate the development of our systems, including improving their speed, accuracy, product range and economics.

“I am delighted to be welcoming Kindred Systems and Haddington Dynamics to the Ocado group, as we believe they have the capabilities to allow us to accelerate delivery, innovate more, and grow faster,” Steiner added.

“I am also excited by the opportunity to enter new markets for robotic solutions outside of grocery that is demonstrated by Kindred Systems’ robust growth, with existing customers such as Gap and American Eagle across the general merchandise and logistics sectors,” the chief executive said.

Ocado noted that the transaction will have no financial impact on the current financial year.

It said it expects 2021 revenues to increase as a result of the two accusations by approximately £30 million with a small negative impact on EBITDA.

The Kindred Systems acquisition is set to be financed by Ocado’s cash reserves.

Ocado said it would pay for Haddington Dynamics with a mix of $7 million in cash and 0.6 million new Ocado ordinary shares.

The business also announced that its joint venture with Marks & Spencer had remained strong through the fourth quarter of the current financial year.

As a result, Ocado on Monday said it expects its full year EBITDA for the group to come in at over £60 million, versus previous guidance of over £40 million.

Ocado’s financial year will end on November 30, with its full year results published on February 9, 2021.

The firm will update the market on its fourth quarter trading on December 10. 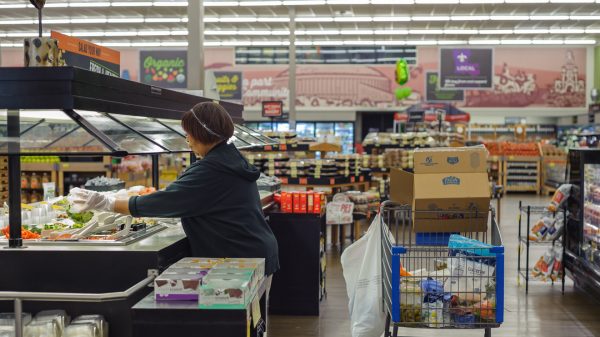