Debenhams and Topshop “always doomed” to fail according to new research

Debenhams and Topshop were “always doomed” to collapse after suffering years of declining interest online, according to new research shared exclusively with Charged.

Debenhams closed its final physical stores over the weekend, marking the first time in nearly 250 years Britain’s high streets will be without the department store.

However, new research from online search specialist My Telescope suggests its “closure was inevitable” once the country went into lockdown.

Focusing on both brand’s share of search in the UK apparel sector since 2017, the research lays bare the once dominant fashion brands’ demise, seeing shoppers gradually lose interest and turn their interest towards rivals.

According to My Telescope Debenhams was never an online powerhouse, largely due to its older audience, making its decline in search share more gradual but consistent and ultimately fateful. 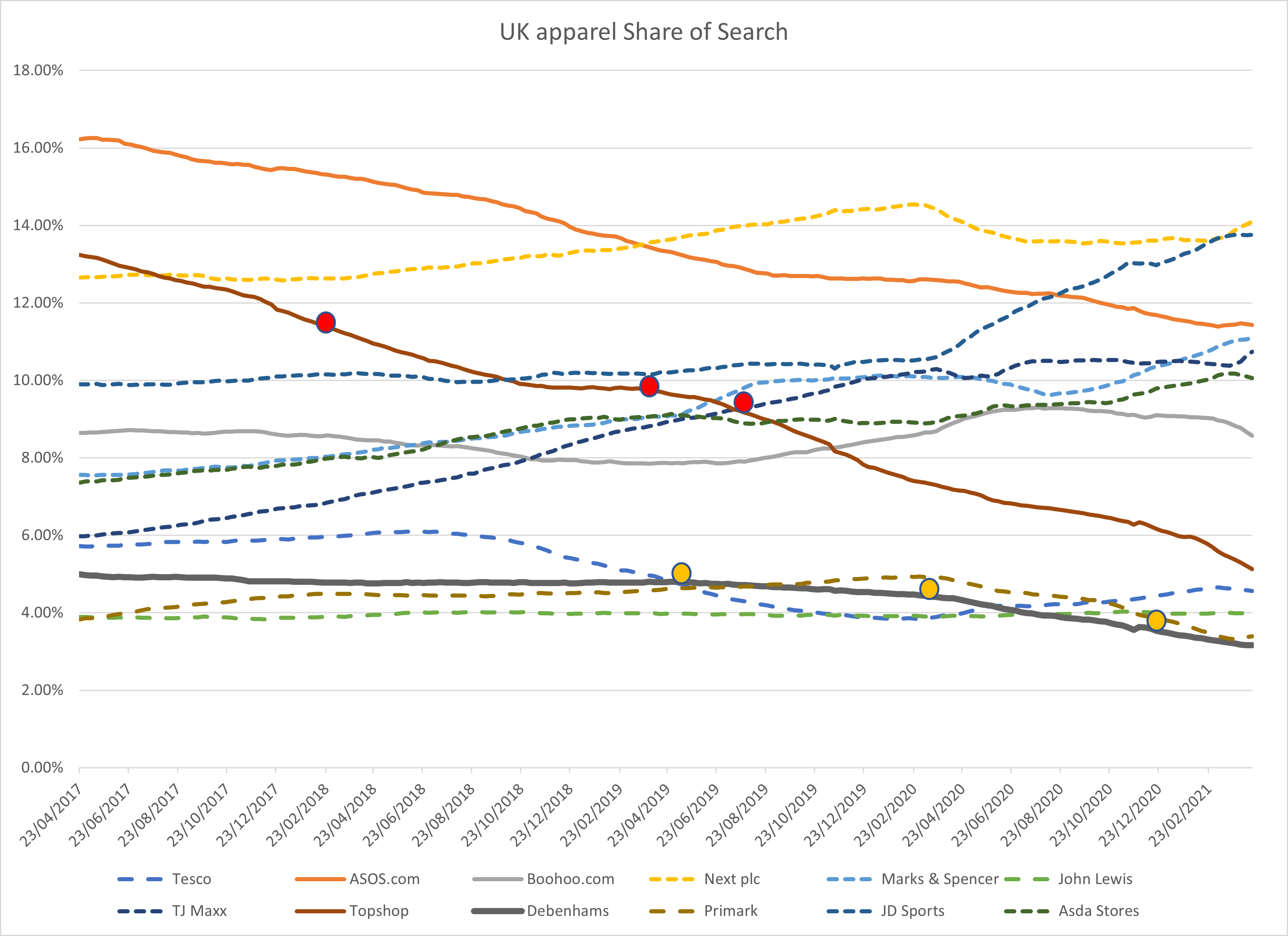 Throughout 2017 and 2018, Debenhams had managed to hold its position achieving around five per cent of retail branded clothing searches, however this changed quickly when it announced its first administration in April 2019.

Its gradual search decline became sharper still when the first national lockdown was announced in March 2020, leading to its ultimate fall into liquidation in December.

“Debenhams didn’t manage to get people searching for their products online and so their decline is more gentle but its closure was inevitable once it went into administration and they could not rely on ecommerce sales because they simply hadn’t pushed ecommerce heavily enough,” My Telescope co-founder Fred Pirenne told Charged.

“That was a terminal mistake when the country was put into lockdown.”

Topshop experienced a much more dramatic fall from grace, one that started long before the impact of the pandemic.

Philip Green was forced to deny rumours he was seeking a buyer for Topshop in February 2018, but the company’s drop in search share points to its financial trouble long before it was reported a year later.

In the year to September 2018 Topshop saw its share of search drop from 13 per cent to 10 per cent, “clearly predicting” the groups first financial loss in six years seeing sales drop nine per cent.

“We can foresee Top Shop’s losses a year before they were reported by the rate of decline in their share of search,” Pirenne continued.

“Then we can see their share of search of plummet once they close stores and people just seem to give up on the brand.

“These two stalwarts of the high street are prime examples of what happens to retail brands who don’t stay relevant to their customers, in this case by developing their e-commerce, so they can sell to them on whatever channel they prefer.”