Amazon, Alibaba, Wayfair, and Pinduoduo all saw revenues jump more than 30 per cent last year as the ecommerce sector exploded in popularity.

According to new figures from GlobalData, nine of the top ten ecommerce companies across the globe reported double digit sales increases during the pandemic.

As COVID-19 drove consumers online in their droves, established ecommerce platforms were able to elicit dramatic revenues increases throughout the year.

Amazon saw online sales grow 40 per cent, while its Chinese counterpart Alibaba also saw a 40 per cent rise in annual revenues, alongside a billion annual active consumers globally on its retail platform during the period. 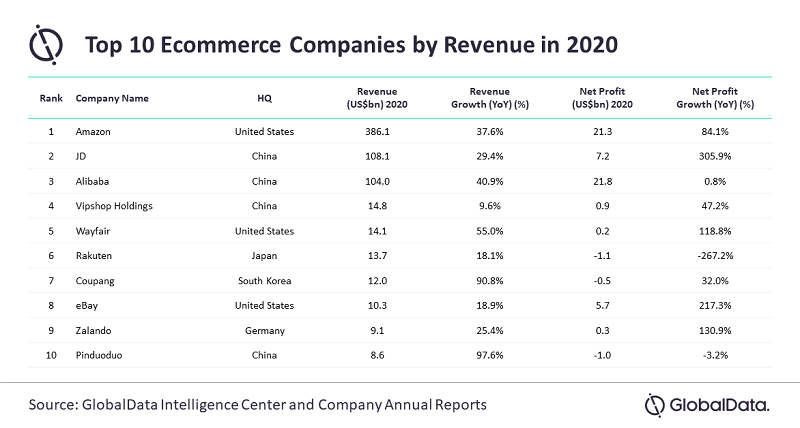 Its rival Pinduoduo also reported its highest growth in revenues for five years, but an increase in payment processing fees meant its net earnings suffered.

“Wayfair’s merchandising investments appeared to pay dividend as the company reported an increase of 53.7 per cent in the number of active customers, and order frequency also increased with Last Twelve Months (LTM) orders per active customer increasing 5.4 per cent in 2020 over that in the previous year,” Globaldata’s business fundamentals analyst Keshav Kumar Jha said.

“Impressive growth also enabled the company to offset the impact of increasing operating expenses on its profitability and Wayfair reported net profit for the first time in the last five-years.”

Of the world’s 10 largest ecommerce players, only Rakuten failed to report double-digit growth, instead seeing a triple-digit decline in net earnings thanks to increasing operating expenses.

“Ecommerce players need to fine-tune their merchandise strategy and focus more on overcoming order fulfillment and delivery constraints to maintain the momentum gained from the pandemic-driven changes in consumer behavior,” Jha added.