Retail workers have been harder hit than any other sector by the ‘pingdemic’ crisis seeing nearly 75,000 staff forced to self-isolate this month.

According to the figures 74,292 staff across the consumer and retail sector are currently self-isolating representing around 2.88 per cent of the entire sector. 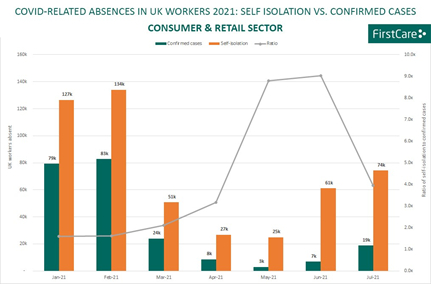 Meanwhile 18,758 employees across the industry are understood to have tested positive for COVID-19 in July.

While retail leaders have warned of store closures and empty shelves, it is worth noting that staff absences are significantly lower than at the height of the last wave in January and February 2021.

READ MORE: What should I do if I was ‘pinged’ and can’t go to work?

In February, retail and consumer staff absences due to self-isolation were nearly double what they are now at 134,000, while absences across all sectors topped 565,000 in January compared to 327,000 this month.

It comes as the England record another record week of self-isolation pings in the seven days to July 14, topping 600,000 for the first time. 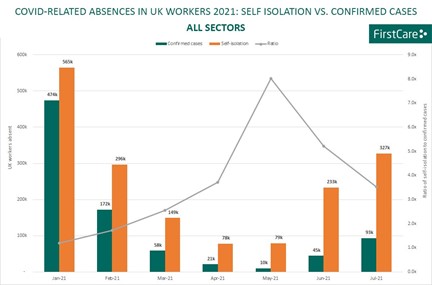 In an attempt to mitigate the disruption to food supplies across the country, the government announced plans yesterday evening to introducing a new COVID-19 testing system allowing key workers to avoid self-isolation if they test negative.

Environment Secretary George Eustice told Sky News that “up to 500” distribution centres and food supply chain hubs have been identified where workers could be part of the scheme.

Eustace told the outlet that the exemption will begin today in 15 “priority testing sites” before being rolled out to 150 supermarket depots and “several hundred” food manufacturers.